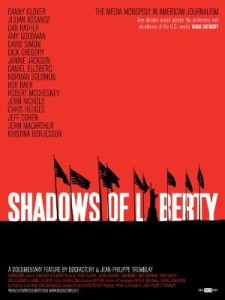 Shadows of Liberty reveals the extraordinary truth behind the news media: censorship, cover-ups and corporate control. Filmmaker Jean-Philippe Tremblay takes a journey through the darker corridors of the US media, where global conglomerates call the shots. For decades, their overwhelming influence has distorted news journalism and compromised its values. In highly revealing stories, renowned journalists, activists and academics give insider accounts of a broken media system. Controversial news reports are suppressed, people are censored for speaking out, and lives are shattered as the arena for public expression is turned into a private profit zone. Tracing the story of media manipulation through the years, Shadows of Liberty poses a crucial question: why have we let a handful of powerful corporations write the news? Media reform is urgent and freedom of the press is fundamental.

Norman Solomon is the executive director of the Institute for Public Accuracy and the author of War Made Easy: How Presidents and Pundits Keep Spinning Us To Death. He is co-founder of the online organization RootsAction.org, which now has nearly 500,000 active members and of a new whistleblower support organization titled Expose Facts. Described by Utne Reader as one of the “fiercest and most articulate media critics around,” Norman Solomon has appeared on many national TV and radio programs including ABC-TV’s Good Morning America, NPR’s All Things Considered and Talk of the Nation, and CNN Television’s Crossfire.